Cline, of Northborough, received his bachelor’s from Brandeis University in 1987 and his Master’s of Business Administration from UMass Boston in 2002. 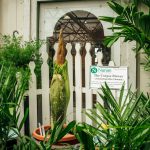