Pentucket Bank is pleased to announce the promotion of several Officer level positions within the Bank.  These promotions were announced and effective as of January 1, 2016. [caption id="attachment_5382" align="alignleft" width="120"]

Melissa Kindig; Mortgage Processing and Closing Officer[/caption] Melissa has sixteen years of experience and has spent the past four years with Pentucket Bank in a Mortgage processing and closing supervisory role.  Melissa attended the former Bradford College in Haverhill and Millersville University in Pennsylvania.  She enjoys volunteering at various Bank sponsored community event and Melissa is also an avid boater, reader, and traveler with her significant other Brian with whom she resides in Salisbury, MA and enjoys spending time her son Jonathan. [caption id="attachment_5383" align="alignright" width="121"]

Michael Welch; Information Technology Officer[/caption] Michael Welch has been promoted to Information Technology Officer and his primary duties include ATM management and the Bank’s Business Remote Deposit Capture product.  Mike has spent eight years with Pentucket Bank and has eighteen years of experience in the IT and Banking industries.  He is involved with Easter Seals, Special Olympics and the Derry Soccer Club and also enjoys auto racing, soccer and snowboarding.  He resides in Derry with his wife Arielle and their two children Jonas and Mirabel. Donna White was promoted to Loan Administration Officer from her previous role as a Loan Servicing Assistant which follows several years in retail banking prior to this.   Donna’s role includes serving of loans and assisting loan customers as needed.  Donna has been with Pentucket Bank for all fifteen years of her banking career.  She is involved in her son’s Cub Scout troop and lives in Plaistow, NH with her husband Daniel and children Hannah and Hunter. [caption id="attachment_5384" align="alignleft" width="120"]

Donna White; Loan Administration Officer[/caption] Established in 1891, Pentucket Bank is a mutually-owned community bank with assets of $650 million and branches in Haverhill and North Andover, Massachusetts and Salem and Hampstead, New Hampshire.  Pentucket Bank has been recognized by Forbes Magazine as one of three New England based community banks that are making a difference, by Banking New England Magazine as a bank that is committed to revitalizing the communities that it serves, and is a five time recipient of The Boston Globe’s Top Places to Work.  Pentucket Bank is the leading bank in Haverhill, one of the fastest growing banks in New Hampshire and North Andover, and a Top Lender recognized by the Small Business Administration.]]> 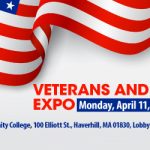 Veterans and Military Personnel are invited to explore their opportunities at this Expo on April 11!Member News