The Greater Haverhill Chamber of Commerce is making a BIG DEAL of the local companies and organizations who have displayed perseverance and achieved longevity in their business. Milestone moments are BIG NEWS and will be cheered at the 100th Annual Dinner & Awards Celebration in honor of the community’s commitment to commerce and development. Awards given this year include the Longevity Award, Half-Century Award and Century Award. Additionally, in keeping with Greater Haverhill Chamber tradition, we will honor the winners of the Charles E. Billups Award, Jerry Loy Award, Community Leader Award and the Chamber Service Award.

This landmark event will take place on Thursday, June 2 from 6:00 to 9:30 PM at Renaissance Golf Club in Haverhill. Marking the momentous occasion, the evening will include a special video retrospective of Haverhill’s commercial history and citywide achievements; story boards from each decade in GHCC’s 100 years of presenting special awards; decorations and décor representing by-gone eras; highlights of the current projects bringing new life to Haverhill – with a special emphasis on Harbor Place, and of course a delectable dinner.

Special guests for the evening include Chairman of Ways & Means, Rep. Brian Dempsey, and our keynote and emcee for the evening, Corporate Comedian and Haverhill Business Owner, Brian Longwell.

The 2016 Awards Recipients are as follows:

Member businesses eligible for this award include companies that have been in business for the “long-haul” not celebrating a milestone anniversary this year, but proven staying power. The focus is on the ability to adjust to the changing economic climate, and company growth.

Bradford Ski
Ski Bradford dates back to the winter of 1949-50, when the Bradford Ski Tow was constructed on Dead Hill, serving mostly local skiers. Adjusting to a changing environment the company morphed from a single tow-rope, to multi tows with night skiing, eventually adding a 2 triple chair-lifts, and finally a third in 2003. At present, Bradford features snowmaking and night skiing on all of its terrain. As of 2014, the area logs about 60,000 ski and snowboard lessons per season.

Haverhill Golf & Country Club
Haverhill Country Club is a private country club offering memberships for golf, pool and dining. Founded in 1925, Haverhill Golf and Country Club stands out as one of the most prestigious and beautiful golf courses in the Merrimack Valley. Its tree-lined fairways and sloping greens will challenge both the casual and competitive golfer alike.

In business for minimum 50 years. Exemplify the leadership, diversity and spirit of hard work and perseverance in commerce. Award recognizes commitment to the growth of greater Haverhill’s economy, consistency to the overall betterment of the community and business community, business’ ability to serve the community and willingness to grow and adapt to the changing environment historically.

Best Western (beginning as Howard Johnson)
The Haverhill Howard Johnson’s is believed to have opened in 1966, making it a half-century this year! The original lodging included 60 Air-Conditioned Rooms with Balconies or Patios. Swimming and Wading Pools. FM Radio and U.H.F. Television. The Motor Lodge operated as a Best Western by the 2000’s. Still accommodating guests, the Best Western Haverhill-Merrimack Valley offers guest rooms featuring a microwave, refrigerator, cable satellite television with HBO® and free high-speed Internet access. They also serve a complimentary full breakfast each morning. Additional amenities include a fitness center, an indoor heated swimming pool, hot tub, guest laundry and full business services. Pets are welcome. This hotel’s meeting facilities are perfect for conducting business and can accommodate up to 110 guests.

Northern Essex Community College
In the fall of 1961 Northern Essex opened its doors to 186 students in the then-former Greenleaf Elementary School on Chadwick Street in Bradford. Most were recent graduates of Haverhill High School as well as high schools in surrounding towns. The college was popular from the onset and in 1971 the Haverhill campus was built in the rural setting off Route 110. The Dimitry Building, Lawrence opened in 1991, followed by the Louise Haffner Fournier Education Center in 2005, and NECC Riverwalk in 2010. The campus added its newest building, the El-Hefni Allied Health and Technology Building, in 2014.

In business for minimum 100 years. Exemplify the leadership, diversity and spirit of hard work and perseverance in commerce. Award recognizes commitment to the growth of greater Haverhill’s economy, consistency to the overall betterment of the community and business community, business’ ability to serve the community and willingness to grow and adapt to the changing environment historicall

Georgetown Bank was originally established in 1868 as Georgetown Savings Bank, a Massachusetts state-chartered mutual savings bank. In order to support a continued growth and provide the latest innovations in banking services, Georgetown Bank converted to a federally chartered stock savings bank in January 2005.

Haverhill Bank opened its doors in 1877 as Haverhill Cooperative Savings Fund and Loan Association. The bank opened Sept. 3 with the sole intention of providing money to its shareholders to buy homes. The bank has prospered and grown steadily over the years, successfully merging with Citizens Co-operative Bank in 1963, Whittier Co-operative Bank in 1983 and Northeast Community Credit Union in 2008. The bank shortened its name to Haverhill Bank in March 2005.

Pentucket Bank was established when we received our Mutual Charter in March, 1891 as a mutual bank which essentially means we are owned by the customers. The original bank was opened for business four hours a week at 35 Washington Street in Haverhill. Primary focus has always been on meeting the needs of the customer. Today, Pentucket Bank still does not have stockholders allowing them to provide a high level of personalized service and to provide stability and support to the communities they serve.

This Chamber Service Award is designed to recognize a person who has committed themselves to promote the mission and values of the Chamber and demonstrates leadership, Integrity, creativity, resource management, and loyalty which has contributed pointedly to the Chamber service area’s viability, image, or quality.

Jayne Andrews, Anstiss & Co., CPAs
Jayne has been an integral part of the Chamber lending her time and expertise to the Membership Services Committee and the Non-Profit Committee. She also serves on the Board of Directors for two area non-profit organizations which allows her to serve as a resource to all her non-profit clients by gaining experience on both sides of the non-profit community.

Nicole Sammartino, Career Resources Corp.
Nicole has continuously makes use of her leadership skills and marketing expertise to the advantage of the chamber and its membership. Serving as the Chairman of the Non-Profit Committee, she has guided the group through educational opportunities, needs assessment surveys and brand building networking opportunities. Nicole has also volunteered her time to serve as a point-person at community wide events such as Kids ArtsFEST and Christmas Stroll and assisted in the planning and execution of GHCC’s “Giving Tuesday” After Hours Event.

The Community Leadership Award is presented to acknowledge and recognize a person within the Greater Haverhill Chamber of Commerce community that has made a positive impact to improve the quality of life throughout our catchment area.

Kelley Contarino, Align Credit Union
Kelley Contarino is a very involved and knowledgeable banking professional. She utilizes her background in finance, business development and marketing to teach young women and girls the basics of doing business budgeting, banking and financial literacy. She is a frequent volunteer for Emmaus Inc. and serves at Community Meals on a regular basis. Kelley volunteers her time assisting with English for Speakers of Other Languages (ESOL) classes at Emmaus’ Bethel Business Center. She also organized a blanket drive for Emmaus and assisted in the promotion of the Spring Food-a-Thon both at her Align C.U. branch on Cushing Avenue in Haverhill and on the credit union’s website. Additionally Kelley is an active member of the Haverhill Kiwanis Club.

The Jerry Loy Outstanding Director of the Year Award is presented to an individual from the current Board of Directors who goes above and beyond in their efforts to support the chamber’s mission, its programs and events, and the organization’s financial viability.

Paul Magliocchetti, Sheehan, Schiavoni, Jutras & Magliocchetti
In 2010 Paul became a Director with the Greater Haverhill Chamber of Commerce, and last year was elected to the Executive Committee. SSJM has also been host, last fall the firm co-sponsored an open house afterhours event at the Haverhill office and the firm will cosponsor other events with the Chamber. Acting as an advocate, Paul through the practice takes time to introduce new businesses to the Chamber and let them know about the benefits it provides within the community.

Sally Cerasuolo O’Rorke, Gold Leaf Fine Jewelry
Sally is the founder and president of Gold Leaf Fine Jewelry, Inc. which she established 30 years ago out of her home. Within 10 years, the business outgrew that space and she moved the company to its current location at 800 Broadway in Haverhill. In 1998, while still operating Gold Leaf, she was named president and CEO of the Greater Haverhill Chamber of Commerce. She was initially appointed to a one-year contract to stabilize the organization, but continued in the position until 2007. During her tenure with the Haverhill Chamber, she chaired “The Great Race”; increased membership from 400 to 800; created Leadership Merrimack Valley in partnership with NECC; co-founded Team Haverhill, a community based organization designed to grow and promote the city of Haverhill; and founded Winning Opportunities for Women (WOW) which has grown year after year into the Merrimack Valley’s premier leadership conference for professional women. Cerasuolo-O’Rorke is also credited with convincing the Greater Haverhill Foundation to buy the former F.W. Woolworth’s department store, resulting in the redevelopment of seven key parcels in downtown Haverhill for “Harbor Place” – a $60 million development.

Tickets are on sale for $100 per person and are expected to sell out. Reservations may be made through the office (978) 373-5663. Additional information may be found at www.haverhillchamber.com.

The Greater Haverhill Chamber of Commerce is the voice of business and the heart of 14 communities in Massachusetts and New Hampshire. We create and foster a prosperous business environment and support the growth and profitability of our members, providing the resources, advocacy, information, networking, and continuing education and marketing opportunities for our members’ success.

Thank you  to our Premier Sponsor: 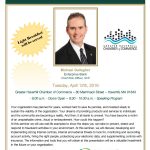 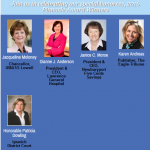